2018 is upon us and the music has kicked off at The B-Side. On January 25th, the Tim Easton performed his—and our—first concert of the year, with a sold-out, boot-stompin’, harp-blowin’ set of gritty Americana fare. One February 5th, we held our first Best Album Ever, Tonight listening party of the year, enjoying a bootleg recording of Bruce Springsteen’s February 5 1975 performance from a tiny club outside Philadelphia. As the snow fell outside The B-Side’s windows, sirens blew by in slow motion—magic.

But enough winter, right? We’re pleased to announce The B-Side’s spring calendar. But, before we get to it, we want to hear from YOU. What’s your B-Side experience like? Share your thoughts in this survey, and be entered to win a pair of tickets to any of the following shows. Now, onward! 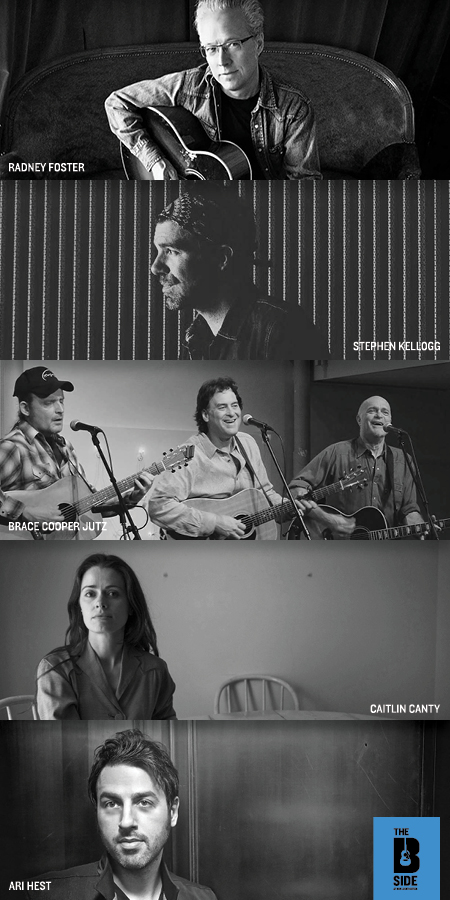 Del Rio, TX-born singer-songwriter Radney Foster makes his B-Side debut on Thursday, March 15th, touring in support of his new album and collection of short fiction, For You to See the Stars. Foster will perform music from throughout his acclaimed career—which includes his solo material, songs from his duo Foster & Lloyd and tracks cut by Keith Urban, Dixie Chicks and more—and tell stories from the book.

SK also makes his B-Side debut this March, in a concert co-presented with B-Side maven and Middle Waves board member, Sanee Lombardi—her first, and featuring her most favorite musician! Kellogg’s brilliant songs will shine in Fort Wayne, and SK himself says: “Fort Wayne! Couldn’t be more excited to be heading back to Indiana this March. I’ve had such a good time on my last two visits, most recently, where we visited Carmel and were able to raise several thousands for a great organization called Random Acts of Flowers. I’ll be visiting solo this time and packing into this great intimate venue with my stories and songs! Can’t wait to see you and thanks for helping spread to your Indiana pals!”

We’re thrilled to present Nashville trio Brace Cooper Jutz—as in, Eric Brace, Peter Cooper and Thom Jutz—with support from Roanoke’s St. John Family Band. Brace Cooper Jutz write brilliant Americana songs and perform them with exquisite guitar playing, tight harmonies, and healthy helpings of heartbreak and humor. You may know Peter Cooper from his long stint at The Tennessean, where he became a favorite journalist and friend to folks like Johnny Cash, Kris Kristofferson, Tom T. Hall and Todd Snider. Be sure to check out his newest book, Johnny’s Cash and Charley’s Pride—one of MK’s favorite books of the last few years.

Erica Anderson-Senter returns to The B-Side with this high-concept night of poetry. EAS doesn’t fuss around; her presentations are superb and we’re thrilled to welcome her and her crew back. Additional details TBA.

An Evening with Caitlin Canty
May 17 9PM

Nashville’s Caitlin Canty makes her Fort Wayne debut on May 17th, fresh from Rolling Stone magazine’s recent list of ’10 New Country Artists You Need to Know’. Caitlin will arrive in Fort Wayne in support of Motel Bouquet, her new record produced by Noam Pikelny (Punch Brothers), which RS calls “dreamy and daring, it’s the perfect LP for ushing in the first hazy days of spring.” Sounds about right to us.

Enough with the B-Side debuts! We’re excited to work again with B-Side maven and connoisseur of all things great, Mark Meyer, to welcome back Ari Hest. Ari’s 2017 performance at The B-Side was memorable, and he returns in support of his latest record—his tenth—and a clutch of new songs. Ari will be joined by Fort Wayne’s own, Sunny Taylor, as opening act and duet partner.

We’ll be continuing our monthly Best Album Ever, Tonight listening series, as well. These parties are casual, no cover affairs where a group of people get together and listen to an all-time great record, on vinyl, in its entirety. It’s been a quite special series, and we’re thrilled to keep it going—

Thank you for supporting this music, and the artists who make it—
Team OLG