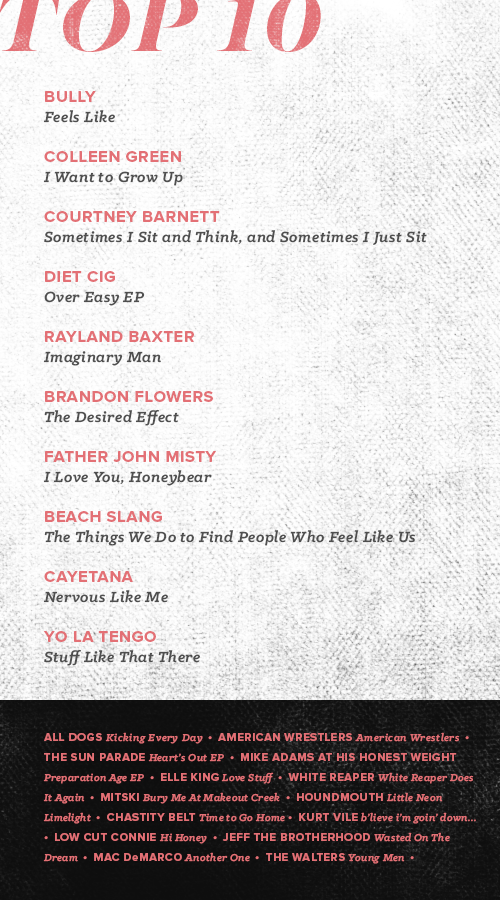 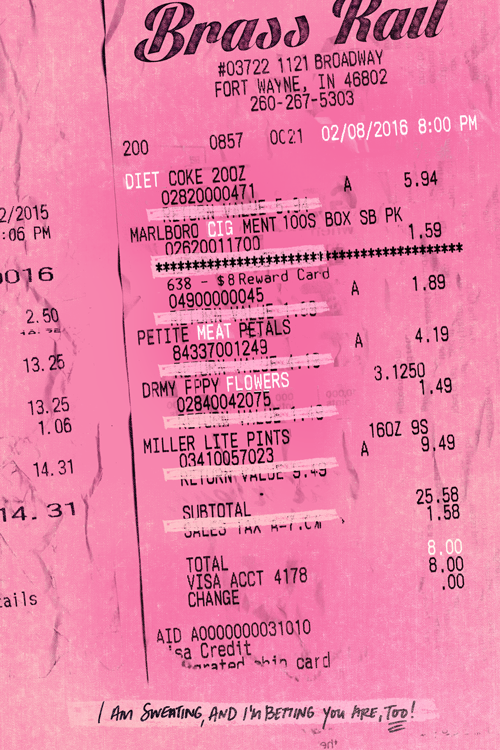 It’s January 8, 2016, but people are still accidentally dating “2015” on all of their important documents, so I still have time to get my year-end review in! And here they are—

1. Bully “Feels Like”
2. Colleen Green “I Want to Grow Up”
3. Courtney Barnett “Sometimes I Sit and Think, and Sometimes I Just Sit”
4. Diet Cig “Over Easy”
5. Rayland Baxter “Imaginary Man”
6. Brandon Flowers “The Desired Effect”
7. Father John Misty “I Love You, Honeybear”
8. Beach Slang “The Things We Do to Find People Who Feel Like Us”
9. Cayetana “Nervous Like Me”
10. Yo La Tengo “Stuff Like That There”

Some other albums I couldn’t stop listening to can be found at the bottom of the list on the left/above, with some special shout-outs to Mike Adams at His Honest Weight Preparation Age EP, Houndmouth Little Neon Limelight, White Reaper White Reaper Does It Again and Elle King Love Stuff (the Ex’s and Oh’s gal… the daughter of Rob Scheinder… amazing).

Bully started their set at MOTR Pub in Cinci, OH, while the line was still around the block to get in. The view inside the venue was basically, if you can imagine, 10 hot dogs being shoved into one bun. (I’ve actually seen Bravas shove three veggie dogs into one bun before, and even that was out of control.) Somehow, I made my way from the middle of the line to the front of the stage within four songs. I was one of thoseee people… the people that push their way to the front; side-eyes and expletives followed the path I was forging in the packed pub. Subsequently, I was pushed over Alicia Bognanno’s monitor by a large group of jean jackets when she started shredding during the second verse of “Six.” It was the best. Missing a toenail, I came back to work on Monday and told my pal, Jake Sauer, the entire story. Unknowingly, he managed to ease my mind for the rest of my life if I ever feel bad about pushing my way to the front of a stage:

“I don’t get that. It’s a rock show. How are you gonna go to a rock show and not expect to get shoved?”

Right on, Sau! Front or bust. Since when did being aggressive* become a bad thing? Always seems to serve me well.

While I’m on the topic of live shows by bands that are my favorite, #4 Diet Cig is coming to Fort Wayne in February! Thank the universe that Corey at The Brass Rail is also a fan and managed to get them to come play. I was lucky enough to get to do the poster (bottom left) and it was an insanely fun one to design. The gal at Creighton Walgreens looked at me a little weird when I asked her to ring up Diet Coke, Marlboro Cigs, slim jims and flower clips in a specific order, but whatever. It was important.

Dang, writing this post just reminded me how great 2016 is shaping up to be—

Make sure you don’t miss a thing with me,
Emma

*Off-topic, but music-related, side note on aggression: I read Patti Smith’s book ‘Just Kids’ this year, as well. (Thanks for the borrow, MK, and the wisdom.) Among many of my favorite quotes, I really loved this excerpt about her other-half’s view on her: “Robert would never compromise, but oddly enough, he kept a censorious eye on me. He worried that my confrontational manner would hamper my chances of success.” That’s why, directly after reading her book, I had to buy a ticket to go see her in Ann Arbor for a book reading. She ended up singing “Because the Night” acoustic with her son, and it was even more amazing than the time I lost a toenail at a Bully concert in Cincinnati.